Mutiny is when a group of soldiers disobey their officers' orders, and try to take control or leave the army altogether.

Huzza – a cheer, like “hooray!” It can also be spelled ‘huzzah.’ 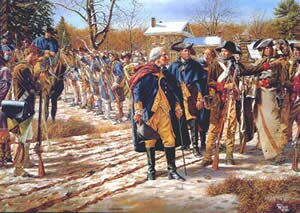 Conditions are bad. It's been a cold winter, and there aren't enough warm clothes to go around. There isn't even enough food to fill our soldiers' bellies. Many of them only get a small ration of bread and water. They sleep in tents that don't keep out the bitter chill. Every night they feel the cold in their bones. And they haven't been paid for months. Sitting in their camp at Morristown New Jersey, the soldiers of the Pennsylvania Line decided they'd had enough. It was New Year's Day - they celebrated with some rum they'd gotten their hands on, though there wasn't much to celebrate. Spirits were very low and men were desperate. The soldiers whispered in small groups and moved around the tents secretively that night. At around 9 o'clock, someone fired a gun into the air. It was the signal. A cry of "huzza!" arose from the soldiers as they began to run out with everything they could carry - including their guns. MUTINY! About half the soldiers abandoned camp. Chaos followed as the officers tried to stop their troops from leaving. But it was dangerous. A captain was killed when a soldier charged him. Anthony Wayne, the General, did his best to bring them back. Sitting on horseback, he spoke to

the men. He understands why they are upset, he explained. He has lived with them and will fight for better treatment. But it didn't work. It's out of your hands now, they told the General. Suddenly a shot rang out. Were they trying to kill General Wayne? "If you mean to kill me, shoot me at once," he shouted, showing them his chest. "No," they replied. They didn't want to hurt the officer. They were going to march to Congress. "When I joined the army, I agreed to fight for 3 years or the duration of the war. It's been over three years now and the war still isn't over. Haven't I put my time in already? I think I should be allowed to leave," said one soldier, who asked us not to reveal his name. The duration of enlistment as well as lack of pay are two main points of contention for the soldiers. General Wayne, not wanting to leave his men and seeing that they would not come back, chose to follow them. He wanted to know if they were really going to Philadelphia. Or were they headed for Trenton, where the enemy would surely welcome them to the other side? In fact, the British had found out about the mutiny. They sent two agents to the soldiers to convince them to join the British. The soldiers, as proof of their loyalty, turned the agents over to a member of congress. A few days later, the two British agents were hanged as spies. There were no more questions about which side the mutineers were on. On their way to Philadelphia, the soldiers stopped in Princeton, New Jersey and set up camp on the college campus. A member of Congress was sent to meet with them, and on January 8th, the mutiny ended. Congress had made a deal with the soldiers. They will be paid and given better provisions. Those who have served for three years are allowed to go home.

Soldiers of the New Jersey Continental Line mutinied a few weeks later but were not treated so kindly. Two of the ringleaders were executed. Washington wanted to stop the mutiny in its tracks, sending a clear message that this kind of behavior would not be tolerated. But he also knew the men can't really be blamed for revolting! Their situation is bad. Washington is doing his best to give the soldiers what they need. We can only hope that this war will be over soon.